Our phones house some incredibly sensitive information, whether that is your Instagram DMs, your Gallery, or your existential ramblings in the Notes app. Needless to say, phone security is very important. After all, you do not want any prying eyes accessing your private stuff. As such, we have compiled a list of the best app lock apps for Android. We have kept this list about free apps so as to ensure monetary restrictions are not detrimental to your privacy. 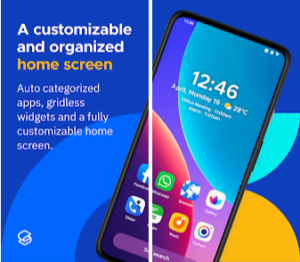 Coming in at number 10 is Smart Launcher 6, a launcher application with decent app locker features.

Generally, the application offers more launcher support and general streamlining of your device than it does app locking features. However, some salient features of the application include hiding sensitive applications and protecting them via a PIN lock that you can set. However, other app lock options, such as fingerprint or face recognition locks, are not available. Still, the features Smart Launcher provides remain impressive due to the fact that the application is primarily a launcher, not an app locker. Additionally, one should note that the application does offer in-app purchases.

The application is available for download on Google Play.

9. Apex Launcher by Android Does Team 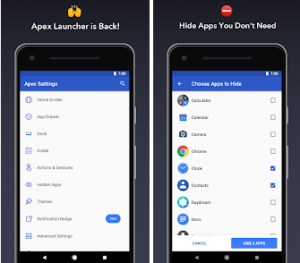 Apex Launcher provides various app locker features despite being a launcher, which is in the same vein as our previous spot.

The app locks offered by Apex Launcher are relatively simple, with the ability to hide certain applications and put a password lock on them. Furthermore, it is usually a decent idea to have app security features in a launcher application, as it makes it more difficult for an intruder to figure out which application needs to be uninstalled to bypass the app locks. As such, this and the previous entry on our list are pretty good options. 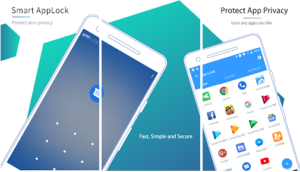 At number 8, we have Smart AppLock, which is a useful free app lock application available on Google Play. Some of the salient features of this application include locks for various applications such as your Gallery, Messages, different social media applications, emails, etc. Furthermore, it also offers advanced app lock features, such as an app-lock fingerprint and intruder alerts (send you a notification if someone attempts to access your device and fails).

However, the main downside of this application is that it is very easy to uninstall if someone knows it is there. It tries to remedy this by disguising itself as your lock screen, though the facade is relatively easy to see through. As such, many of its capabilities are rendered moot.

In essence, Smart AppLock’s features are impressive, though they are mitigated by the ease with which they can be bypassed. As such, we rank this app locker at number 8. 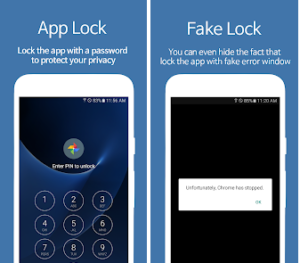 The number 7 spot in our list is home to AppLock – Fingerprint by SpSoft, available on Google Play. We had to cut some marks for the rather cumbersome name!

In terms of functionality, AppLock is a good choice on the market. It has some quintessential app lock features, such as various locks for applications. However, AppLock goes further by having fingerprint and face recognition locks, a feature many other app lockers fail to provide. Furthermore, AppLock – Fingerprint also takes the pattern locks offered by most app lockers up a notch. Specifically, it allows the standard 3×3 grid to be scaled up to an 18×18 grid, increasing the number of possible patterns by a lot. Finally, it even allows sending fake error messages when someone accesses a protected application.

However, in-app purchases and their lackadaisical approach to uninstallation of the app prevent it from scoring higher. As such, it may not be the best privacy lock app out there, but it is a decent option. 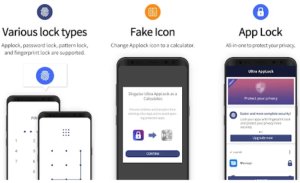 App Lock – Ultra Applock can be downloaded via Google Play and makes it the number 6 spot by virtue of its merits as an app lock application. Again, similar to previous entrants in this list, it does not score higher due to in-app purchases, pay-walled features, and certain security and miscellaneous issues.

This application offers many of the same features touted by the apps above and has support for a variety of privacy locks, including fingerprint, password, and pattern. It also provides the ability to send fake error messages and provides intruder alerts via a sneaky selfie of any snoopers. A spicier feature that Ultra Applock provides is the ability to disguise itself as an innocuous application like a Calculator.

However, Ultra Applock’s privacy locks can easily be bypassed by simply uninstalling the app. While the disguise feature certainly helps, it is not difficult to surmise the app’s presence, after which it becomes simple to circumvent. Furthermore, it provides certain cleaning features which do not work. If you stay away from the cleaning features, this is one of the best apps for privacy locks! 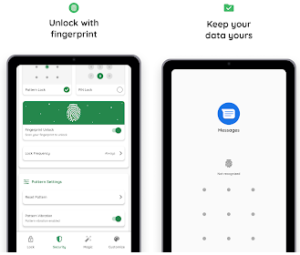 AppLocker by BGNMobi lands itself in the number 5 spot by virtue of its merits as an app locker but prevents itself from scoring higher by offering in-app purchases and pay-walling certain features. Given this article’s concern with frugal app lockers, AppLocker is best placed at number 5.

AppLocker offers certain excellent app lock features, such as privacy locks for various applications via a password, pattern, or even fingerprint lock, assuming your device supports taking fingerprints. Furthermore, it offers a range of customization options, though this is limited compared to other app lockers on this list. It can also prevent external users from uninstalling applications by prompting them for a password or fingerprint. This provides an added layer of security that prevents an intruder from simply uninstalling the app and bypassing its app lock features.

Finally, it also takes selfies of intruders trying to access restricted apps and failing. So if you want to see who’s snooping around on your phone, AppLocker is a great choice! You can get the application right now on Google Play. 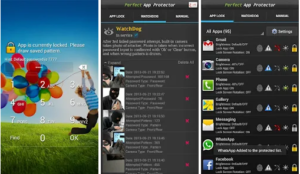 Despite the slightly (read: very) hyperbolic name, Perfect AppLock by Morrison Software really is one of the best app lock apps on Google Play.

It offers many of the same features the best app lockers on the market do, and it sets itself apart by having the free version provide the exact same features as the paid version! We love free stuff that maintains its quality, and Perfect AppLock is a great example of what we like. Plus, you have all the privacy locks you could dream of: fingerprint, password, pattern, anything! Perfect AppLock is sneaky with its fingerprint feature by having a fake fingerprint prompt, which eliminates the need for your device to support fingerprint scanning!

As such, Perfect AppLock is one of the best apps for upping your privacy. 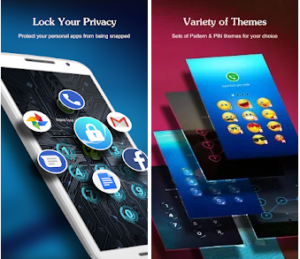 Now we are onto the real heavy hitters in the app lock world, with AppLock by SailingLab coming in at 3rd place.

Unsurprisingly, this application offers all the privacy locks you can imagine: password, PIN, fingerprint, and pattern locks are all available. Other features, such as intruder selfies and the ability to lock system applications, make it one of the best app lockers on the Google Playstore. However, it does have in-app purchases and does not provide uninstallation security, which can be a pretty large downside. 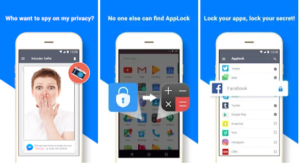 The best part about this application is the plethora of features available that give this application intense utility. From disguising its icon to a Calculator or Notepad to privacy locks of all kinds, this application is one of the best app lockers on the market right now! It also allows you to lock system applications; a feature few other app lockers can boast. However, it does not provide uninstallation security, something that prevents it from clinching the number 1 spot! 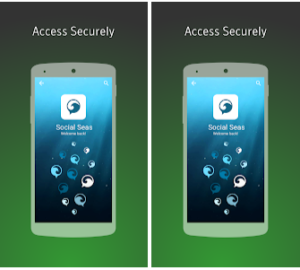 On the coveted number 1 spot, we have the best app lock application of them all: Norton App Lock. While most of us are aware of Norton Anti-virus, it may be a surprise to learn that they make a kick-ass app locker as well!

Norton App Lock offers a variety of app locks but does not provide fingerprint scanning. Fortunately, this is the only real downside of using Norton App Lock, as it does most other things very well. Specifically, it provides excellent uninstallation security and intruder alerts, is incredibly lightweight, and has an intuitive User Interface.

Trust us and give this application a try; we swear you’ll agree with us by the end!

Q. Are there app lock applications on iOS?

There are many options for app lockers on iOS as well. Our pick of the best iPhone app locker is LockID – Private Vault App, which provides the ability to lock a variety of applications using FaceID, a password, or a PIN.

Q. Can I lock apps without third-party software?

If you have a newer Samsung phone, you’ll most likely be able to lock applications without any third-party software. All you have to do is the following: 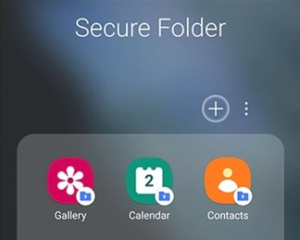 If you do not have a Samsung phone, it’s easiest to use third-party app lockers.

Q. Is there an in-built AppLock in Android?

The answer to this question depends entirely on the manufacturer of your specific phone, with some companies including in-built options while some may not. Samsung is a good example of a company that includes in-built app lock software.

Yes. Depending on the application you use, you may be able to do both.

We hope this list has been helpful in giving you a layout of the different app lockers available and which ones you should give a shot. Remember, most of what we have said has been backed by reasons, but you may find an application more convenient than we did. As such, make sure to experiment and find which application suits you best. After all, the best Android application is the one you find the most useful!